She was comparing paid media placements – what we call today branded articles or advertising – with PR/communications. PR/communications is earned media such as publishing thought leadership articles in trade publications, distributing press releases, and getting shares and notice on social media.

We’ve discussed this issue and this comparison before in other blogs. However, traditionally, earned media means we have earned a place for our client’s articles in industry trade publications by providing high-quality information for readers. This is crucial because getting published is still key to credibility for an individual or organization.

With paid media, as this implies, we have paid for that placement. While paid media certainly can be effective, it can be costly and lacks the credibility of an earned media placement.

I rarely mention this adage because I believe in the value of industry trade publications and realize that most depend on advertising. A recent example of earned media’s potential, however, proves we cannot deny its effectiveness.

I am referring to the introduction of Tesla’s Cybertruck a couple of years ago. 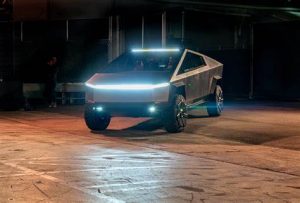 The company’s founder, Elon Musk, introduced the truck made of stainless-steel alloy and metal glass. So tough and durable is the body and the glass of the truck that it can withstand bullets and sledgehammers.

Well, the introduction of the vehicle was not a smashing success – or, for publicity’s sake, it was. During the big reveal, Tesla’s head of design, Franz von Holzhausen, threw a metal ball at the front left window of the truck before an audience that included dozens of reporters.

The window smashed. Embarrassed, all Musk could say was, “There is room for improvement.”

Tesla stock fell by more than 6 percent shortly after the presentation. But here’s where our adage – publicity is what you pray for – comes into play.

Musk reported that within 48 hours of the awkward demonstration, Tesla received 150,000 orders for the Cybertruck.

It looks like Woodward was right. Publicity, good or bad, can really pay off.

Since publishing this item, Tesla has asked me to link it to this article that discusses their truck in greater detail.

Musk is known for making billions with PayPal and Tesla. Many consider him a business genius. But he is undeniably a PR genius as well. He has gone beyond getting his name published in every major trade publication, on television, and about everywhere on social media. And he really, really likes it.

Some now believe his intention to purchase Twitter was some publicity stunt. His flight around the moon in his SpaceX private spaceship with a mega-publicity stunt, once again getting his name flashed on every media forum available.

He’s fearless. He’s made some mistakes that have gotten him in trouble with the U.S. government, and his involvement with Twitter could cost him some money.

But at the end of the day, he relishes it. For Elon Musk, PR is, without question, something he prays for.

If you are a Thought Leader, individual or organization, ready to take your brand to the next level and would like to work with AlturaSolutions and launch a strategic national PR campaign, let’s connect!