You are here: Home / Results

Results: How We Have Helped Our Clients

Quality content published in print and online can help promote a product or service, facilitate sales, improve a company’s reputation, and ultimately lead to business success.  Further, it can do this at a substantially reduced cost compared to advertising.

The following are some of the results we have achieved for our clients.

A small manufacturer of Green cleaning chemicals found they were having difficulty in developing brand awareness, as well as struggling to find distributors in North America willing to market their line. While advertising might be able to help, the company decided that approach was far too expensive for them at that time; moreover, they were not convinced that advertising would effectively communicate who they are and how their products are different—with more features and benefits than their competitors’—to end-users and distributors.

To address this challenge, the company hired AlturaSolutions Communications in 2005 to promote the company and its products using PR/communications. AlturaSolutions was able to secure article placement in a variety of B2B publications in areas ranging from cleaning and maintenance to health care, education, restaurant/hospitality, and, in one case, publications for private and public bus companies (since the company manufactured Green cleaning products that could be used to clean busses).

Proven Results. Client for ten years.  We played an important and vital role in helping them grow and expand.

One of the leading manufacturers of floor care equipment in North America was looking for a way to differentiate their company from the competition. Most floor care machines manufactured and/or sold in the U.S. are rotary machines. This equipment uses a disk that turns a pad that in turn cleans or polishes a floor.

This company, working with a German manufacture, wanted to introduce cylindrical brush machines into the North American market as a viable and effective alternative floor care technology. Cylindrical brush machines use brushes instead of pads. The key benefit of these systems is that brushes can dig further into the pores of floors and grout, removing soils. These machines are also surprisingly easy to use, whereas rotary machines require some training and stamina on the part of workers. Also, because cylindrical machines are square, they can lineup against walls and reach into corners, cleaning floor areas that workers generally have to clean by hand.

In 2003, this company hired AlturaSolutions Communications specifically to promote cylindrical brush technology. While these products were common in Europe, they were not widely known or used in North America. The first objective was to describe the product to end-users. To do this, AlturaSolutions placed more than 50 articles over a three year period in cleaning and maintenance publications serving a variety of market segments, describing how cylindrical brush machines work and their benefits. Soon, the market segment expanded to school and health care publications (as floor care is a major cleaning consideration in these settings).

Today, cylindrical brush machines are some of the best-selling products this company manufactures. Starting with just one model, they now market several different systems that address a variety of floor care needs. In fact, in what is probably the most significant indication of how well this PR/communications program worked, several of the company’s competitors now also offer cylindrical brush floor machines. Imitation is the sincerest form of flattery, after Proven Results. Client for twelve years and counting.

Results: Realizing the Benefits of No-Water Urinals in America 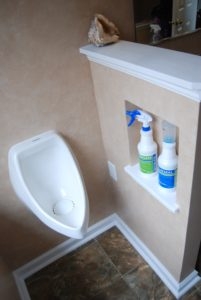 In 1992, a California manufacturer began marketing a line of no-water urinal systems in the United States. These urinals are actually manufactured in Germany and Mexico, where they are found in many types of facilities and have been widely accepted by the public.

Waterless urinals were seldom installed in the United States at that time. However, as water concerns mounted throughout North America, the California manufacturer decided it was time to give their product line a bigger push.

Traditional urinals use about 40,000 gallons of water per year. As the name implies, no-water urinals use no water. This presents enormous benefits to both water conservation and the bottom line. However, the company soon realized they would have to accomplish the following significant goals in order to market their products effectively:

To accomplish these goals, in 2004 the company hired AlturaSolutions Communications to get the message out to building owners and managers regarding the benefits and features of no-water urinal systems.

AlturaSolutions began a campaign to place articles in a variety of facility publications to explain how these systems operate and how they can prove beneficial. We also began two PR programs that have proven to be very effective. First, we began conducting regular surveys of building owners, asking them questions regarding a variety of water- and restroom-related issues. AlturaSolutions produced press releases about the results of these surveys, which were widely published.

AlturaSolutions also positioned the owner of the company as an expert in water use and water efficiency—as indeed he is. Positioning him as an authoritative expert on these issues added more impact to his articles and describing the benefits of the product.

Today the company has grown significantly growing from just a couple of several reps and distributors throughout North America.  And while new and far-larger restroom fixture manufacturers now market no-water urinals in the United States, this California company is still one of the largest suppliers of waterless urinals in North America.

In the late 1990s, a jansan distributor designed a machine that cleans restrooms and other surfaces without the cleaning professional having to touch them. This system essentially pressure washes surfaces and fixtures; after cleaning is complete, a built-in vacuum system removes all moisture and soils.

However, this distributor was struggling to get the message out to cleaning workers about the advantages of his system.

His company hired AlturaSolutions Communications to take on this task in 2002. Our first step was to publish a series of articles discussing ways to perform restroom cleaning more professionally. However, as studies began to find that this system actually cleans restrooms faster and more thoroughly than conventional restroom cleaning methods, this theme became the new focus of our work. Over the years, we have placed more than 100 articles for this client in a wide variety of publications dealing with cleaning issues.

Starting with just one machine, this company has now expanded its product lines to include several models and a range of related products. The product is now sold internationally and the company has recently introduced an entirely new product line. We are repeating the methods we used for the first system to discuss the features and benefits of the new line…globally.

In addition, some of the leading manufacturers in the professional cleaning industry have recognized the system’s form of cleaning as credible, reliable, and even necessary in many situations. Many now make systems similar to this original machine…proving once again the old adage that imitation is the sincerest form of flattery.

Results: Moving From Fad to Norm

In 2003, many in the professional cleaning industry viewed Green cleaning as—at best—of limited interest to the industry or as simply a fad. In fact, at that time, many leaders in the industry predicted that Green cleaning’s impact would follow the 80/20 rule: 80 percent of facilities would be cleaned using conventional cleaning products with only 20 percent cleaned using Green products.

Ten years later, we know the opposite is true. In most cases, a Green cleaning product is selected first with a conventional product chosen only if an environmentally preferable one is not available or is for some reason not cost or performance effective.

AlturaSolutions  played a role in this transformation. In 2003, the leading Green cleaning advocate in the industry hired AlturaSolutions for two reasons:

As with other clients, these objectives were attained by supplying publications of all types—cleaning, healthcare, education, retail, hospitality, etc.—with credible, well-thought-out content about the values of Green cleaning. With each article, the consultant or a member of his organization was quoted or listed in the byline as an expert and leader on Green cleaning issues.

Today, along with playing a key role in advancing the acceptance and merits of Green cleaning, the consultant is well known as “the father of Green cleaning.” Most manufacturers, facility management organizations, school administrators, and other groups looking to Green their operations now turn to this individual and his company for Green cleaning guidance.

The days of Green cleaning being a fad are well over; the value of this consultant and his organization for several industries is now well established.