You are here: Home / AlturaSolutions Newsroom / Climate Change Is Making This Summer A Game Changer

Climate Change Is Making This Summer A Game Changer was published for Klaus Reichardt, a Thought Leader, advocating water efficiency.

Many of us may not be aware of this because it has received so little attention in North America, but Turkey is currently fighting some of the worst fires in decades. According to an August New York Times report: “Fires blazed uncontrollably for the eighth day on Wednesday, aggravated by a record-breaking heatwave that follows a prolonged drought. The nation has watched in horror images on television and social media, as thousands of people have been forced to evacuate homes, coastal resorts, and whole villages, primarily in the south, and herds of livestock have perished in fast-moving blazes.”

The Times article goes on to discuss how due to climate change, this summer has been a 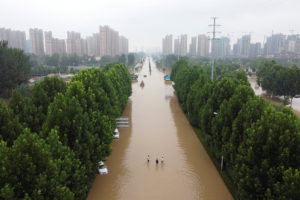 summer of “widespread extreme weather” — from floods in Germany and Belgium to record-breaking heat waves, drought, and wildfires in Russia, Italy, Greece, Canada, Brazil, and the United States.

As for the U.S., most of us are aware of the fires currently happening in Oregon and parts of California. As of this writing, these fires are continuing — if not growing — due to extreme heat. Further, gusty winds are now flaming the wildfires, further spreading them. Most observers say that California is now experiencing its largest wildfire on record, once again all due to climate change.

Does this sound familiar? Didn’t they have massive wildfires in California last year? And how about the summer before?

The unfortunate reality is that since 2013, millions of acres of the state have been burned. The only difference is that the past five years have been some of the worst, and, each year, the fires get larger.

The real question we should all start asking — especially those in the plumbing and mechanical industry — is if this summer is the turning point. If this summer is the game-changer due to climate change, when we all come to terms with the fact that the climate is changing worldwide, and the sooner we accept this, the faster we can take steps to address it.

Please note, I am not focused on why climate change is happening. My focus is on accepting it as a reality. Our activities are likely playing a role — possibly a significant one — in causing climate change. However, the plumbing and mechanical industry will play a vital role in helping commercial facilities deal with the changing climate, especially regarding energy and water consumption.

Here are some steps the plumbing and mechanical industries can take with regard to energy and water to help their customers address this changing climate.

A developer in Malibu, California, is developing 70 houses that are net-zero as to energy consumption and will be net-zero carbon homes. This means as the homes are built, there will be no on-site combustion; 100% of the electricity will come from renewable sources; the most highly efficient mechanicals will be installed; and 100% of the embodied carbon (emissions released during the construction process) will be offset using sustainable material. There are already about 15,000 net-zero energy residences in the U.S. The next step, with residential and commercial property, is to build and renovate facilities so that they are net-zero carbon.

Accept the fact that we must pay more

Historically, water in the U.S. has been undervalued. Water and sewer rates typically cover only a small portion of what it costs to deliver, remove and treat water. The long-term impact of this is water infrastructure in this country is falling apart. There are an estimated 230,000 water main breaks each year. These breaks invariably mean millions of gallons of much-needed water is wasted. If utilities can charge more for water, they will have more money to fix infrastructure.

We no longer want to just conserve energy or conserve water. Instead, we need our facilities to become more energy-efficient and water-efficient. This is long-term reduction in energy and water consumption.

This is where mechanical engineers can play such a crucial role. From facility HVAC systems to heating and water distribution in a facility, steps can be taken that significantly reduce consumption.

Plumbing engineers can suggest various systems, technologies and alternatives to their clients to help reduce water consumption, especially in kitchens and restrooms. For instance, in California and parts of the drought-ridden southwest, the installation of no-water urinals is becoming commonplace.

Most importantly, we must accept the fact that climate change is real. However, we must also accept that we still have time to address it. Technologies are already available that can help us accomplish this. They just need to be implemented.