In 2011, a major California airport hired a risk management/risk assessment organization to determine if there were weak security points at their facility. The airport security assessment evaluated several high-tech security measures the airport currently had in place and suggested new measures airport administrators could take to beef up protection and reduce potential threats and risks.

Among the recommendations were to consider a new generation of more robust baggage scanners, backscatter x-ray equipment, and full-body scanners, all technologies that have played a much more significant role in airport security since 9/11.

There were also some low-tech recommendations. For instance, the risk assessment organization found weak points in the perimeters surrounding the airport. Often airports rely on surveillance beams and cameras to protect their boundaries, but these systems are not always dependable. In this case, there were areas where someone could possibly get onto the airfield, innocently, or to harm others or even themselves.

As we mentioned, this was a large airport. Change happens in large facilities of all kinds, but it sometimes moves slowly, even when it involves security. However, when it came to one security measure  recommended, one did come too late.

On April 16, 2014, a 16-year-old boy managed to get on the airfield, hiding himself in a plane’s wheel well bound for California to Hawaii. Surviving cold temperatures at 38,000 feet and a lack of oxygen, “the kid is lucky to be alive,” said FBI spokesman Tom Simon in Honolulu. Noting the boy was unconscious for the lion’s share of the flight, “he doesn’t even remember the flight.” 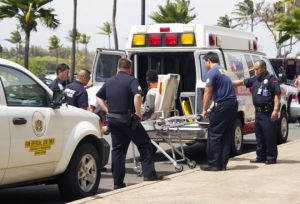 The airport we are discussing here is San Jose International Airport. The risk management/assessment organization was my company, TAL Global, based in Silicon Valley. Since then, we have gone on to work with airport administrators in all parts of the world, helping them minimize risks, threats, and even unexpected events – such as having a 16-year-old boy thumb a ride on a flight to Hawaii.

While many of the recommendations we provide airport administrators are specific to their facilities, several can apply to airports worldwide, especially here at home. Among these are the following:

“Chat-downs.” When Americans encounter chat downs, they often believe they are an invasion of their privacy. However, airport security personnel worldwide, especially in Israel where this technique became standard operating procedure, think they have helped thwart a variety of possible threats. A chat-down occurs when departing passengers are asked a series of questions before arriving at the check-in desk. These can take a minute or two, or much longer, if security agents believe additional screening is required.

The answers to these questions are almost irrelevant. The authorities are looking for physical cues such as poor eye contact, inconsistent head gestures, hand gestures, body language and other movements. According to Rafi Ron, a former security director at Israel’s Ben Gurion International Airport near Tel Aviv, chat-downs “create an uncomfortable situation for bad guys that is difficult to overcome.” In other words, they have value.

Airport Security Behavioral Pattern Technologies. These technologies are the high-tech version of chat-downs. Taking the center stage shortly after 9/11, these technologies look for unique behaviors that often associated with airport users plotting unlawful activity.  These systems are designed to fill the gap left by most common security approaches that rely primarily on the detection of banned items but ignore the people who carry them. While some of these systems use different forms of “racial profiling,” many airport administrators have decided that when it comes to airport and passenger security, they must place security concerns first.

Randomized Canine Inspections. At a Congressional hearing in July 2011, William Parker, the inspector-commander of the Amtrak Police Department’s K9 Unit, said that on Amtrack, “a well-trained dog is more capable, useful, reliable, and effective than [security] equipment. Dogs do not depreciate like machinery. If dogs are trained properly and their training is consistent, their skill level will increase with experience.” Canines have proven their value in security for years. However, what can impede their benefit to airport security is that all too often, canines are used on set schedules. A sweep is made of one gate at 9 p.m.; a building entrance at 11 p.m.; then another at noon. Canine sweeps need to be randomized. Set schedules are easy to detect and provide easy openings for potential threats. 1

Biometric Entry/Exit Systems. As a result of an executive order, signed by President Donald J. Trump in March 2017, by 2021, the top 20 airports in the United States are to screen “100 percent of all international travelers” including American citizens arriving at U.S. airports from overseas. This will be handled primarily by what the U.S. Customs and Border Protection Agency calls  biometric entry and exit systems.  More commonly, this technology is known as facial recognition.  While used and accepted in airports around the globe, it has stirred up some controversies in the U.S.  In some cases, it is not always correct, identifying one face with the wrong person.  In other situations, there can be security breaches. Recently in China, a facial recognition system exposed the personal information of 2.5 million people after leaving a database unprotected.  However, these technologies are being fine-tuned, and as security becomes an ever-greater concern in airports around the world, we can expect used far more frequently in the future.

We are in an exceedingly difficult situation when it comes to COVID and airport security. In this case, the word “security” refers to the health and safety of airport personnel as well as travelers.  But with COVID, our focus in on health.

To address this challenge, many airports have installed supplemental hand sanitation stations throughout their facilities, placed decals on floors to encourage social distancing, installed walkway directional signs, and where possible, install plastic barriers.  No-touch restroom fixtures are now the norm as are different forms of smart technology that help minimize interactions between airport staff and travelers.

What’s more, new technologies are coming online that can help us quickly detect those that might have the disease and pose a risk to others.

For instance, rapid COVID diagnostic systems have been developed at the University of Oxford that deliver results in 15 to 30 minutes. At Heathrow Airport in London, an entire diagnostic facility has been created to screen passengers bound for certain parts of the world.  If the tests prove negative, the passenger can board the flight and may not be required to quarantine themselves upon arrival at their destination.

However, not all these measures, including new rapid diagnostic systems, have proven totally reliable in stopping or significantly reducing the spread of the disease.  A study published in September 2020, but conducted earlier in the year, found that with most current airport screen measures in place:

Only a small proportion of cases were detected at airports during entry screening. Entry screening alone cannot be effective to prevent importation of cases, but could be considered as a supplementary response measure to information strategies at airports.

The problem, according to these researchers, is that people may travel with “mild symptoms, be asymptomatic, pre-symptomatic, or are concealing symptoms that cannot be detected through entry screening.”

However, the researchers concluded that even with its limitations, what systems we have in place should be continued, if for no other reason, then to detect those small number of travelers that are trying to board airplanes. 2

As to COVID and airports, all we can do now is have patience and pay close attention to new screening technologies.  These technologies are being produced and are coming online quickly.  But because many of may be costly, it is best to wait until they are in actual use in airports, to get user feedback.

As to the other security measures discussed earlier, all of these, in one form or another, can and should be implemented.  Though it is hard to see through the dark clouds of this pandemic, there is light at the end of the tunnel. In time, we can expect air airport security, and along with it, air travel, to advance considerably.

Johnathan Tal is CEO of TAL Global.  Based in Silicon Valley, TAL Global is a leading risk management, security consulting, and investigative agency serving airports and other clients all over the world.  He can be reached through his company website at www.talglobal.com