You are here: Home / Blog! / Why Healthcare Facilities Should Avoid Mopping Floors

AlturaSolutions Turns Words Into Sales | 312 880 8176.  This White Paper was prepared for Kaivac, developers of the No-Touch Cleaning(R) System.

In the early 1970s, the Ottawa (Canada) General Hospital and the Department of Microbiology and Immunology at the University of Ottawa, decided it was time to see if this might be true, and even more, if it could be linked to the spread of nosocomial infections the hospital was experiencing.*

Now, some might question the validity of a study that is nearly 50 years old. However, we answer that question with a question:

Are floors in hospitals and other types of facilities still being cleaned with mops and buckets?

The answer, of course, is yes. The most common method used today to clean floors is by using mops and buckets. While different techniques and alternatives are now available that were not in use in the 1970s, those alternatives are just now making inroads into floor cleaning.

Some might also ask how contaminated floors could spread infections. The answer here is something called cross-contamination. It is estimated we have as many as 50 direct and indirect contacts with floor surfaces every day. If the floor is contaminated, we can then spread this contamination onto other surfaces or, if we touch our eyes, nose, or mouth, ingest the contaminants, potentially causing infection.

This cross contamination issue has been verified in a very recent study. In this case, 160 patient rooms at a Cleveland, Ohio hospital were tested. The research firm conducting the test reported:

“We found that the floors in patient rooms were frequently contaminated with pathogens” and that “contact with objects on floors frequently resulted in the transfer of pathogens to hands.” In other words, cross-contamination can start with the floors, and along with it, the spread of disease.”

The researchers first selected 134 different floor areas in the Ottawa hospital for evaluation. These floors were swabbed before and after floor mopping. The initial findings “showed that the [mop] cleaning procedures were, in fact, spreading gross contamination throughout the hosp 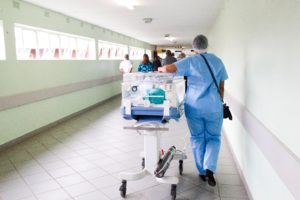 To better understand what was occurring and determine ways to prevent the spread of this contamination, the investigators did the following:

• Six 24-ounce mops that had been used the day before to clean floors in the hospital were extracted and washed, as they normally would be in buckets, and hung up to air dry on a rack. The researchers noted that this procedure was normally used in the hospital, “until the mops fall to pieces under the influence of bacterial decomposition.”

• The buckets used were cleaned and disinfected with a hospital-grade disinfectant. The disinfectant was mixed with one gallon of water.

• Samples were then taken from the mops and the mop water and tested using Petri dishes. All cultures were allowed to incubate for 24 hours.

In a second experiment, the researchers used twelve 24-ounce mop heads. They were again extracted and washed as above, but this time they were sent to the hospital laundry for further washing.

It was concluded, according to the researchers, “that standard laundering provided acceptable decontamination of even heavily contaminated mop heads, but that chemical disinfection, even with a good phenolic disinfectant at uneconomically high concentration, was ineffective.”

While laundering the mop heads could provide acceptable decontamination, the researchers indicated the trouble here was, “this recommendation is usually ignored, either because of the costs involved or the lack of [laundering] facilities.”

To rectify the situation, the researchers recommended the following:

• That housekeepers only use new mops that had never been used before and that they be used for one day only. This was a costly conclusion, but it was reached because “even as early as the second day of use, a bacterial count of millions was found on the mops . . . which increased over three days.”

• That powerful hospital-grade disinfectants be used in the cleaning solution to help slow the growth of contamination.

• That buckets be cleaned and rinsed every 60 minutes.

• That mops be rinsed and allowed to air dry and buckets be emptied and cleaned whenever housekeepers took breaks.

• If mop heads were to be used a second day, that they be cleaned and then laundered, and that the laundering process include a thorough drying. (The researchers found that thorough drying did help kill more bacteria.)

While the study proved that mops can and do spread contaminants in the hospital, which can result in infections, the researchers concluded that “it is not possible to determine with certainty the role of mop-spread contamination in the production of nosocomial infection.”

What they did find was that mops incubated bacteria such as Alcaligenes, Enterobacter, E. coli, and Streptococcus. Further, over a three-month period, the most frequent single infecting organism in the hospital was E. coli. These organisms were also found to survive as long as five weeks on a mop head.

“Despite the epidemiological uncertainty, it is our view that the daily painting of hospital floors [using the mop and bucket cleaning procedure] must be regarded as an unsatisfactory process,”

If the scientists in this study concluded that mopping floors is an “unsatisfactory” process, what options do hospital administrators, as well as administrators of schools, office buildings, and a variety of other facilities, have to replace it. In very large floor areas, one option is to use an automatic scrubber. The key benefits are that no mops are used and that fresh water/cleaning solution is always being applied to the floor. As the machine is walked over the floor, moisture and floor soils are vacuumed up.

However, there are concerns about using automatic scrubbers:

· These machines are costly to select and maintain, so they should only be selected for cleaning very large floor surfaces.

· Cleaning workers should be properly trained on how to use these machines.

· The rotary pads (or brushes on a cylindrical scrubber) should be changed frequently. Just like mops, they may become contaminated over time.

· Automatic scrubbers often cannot clean floors underneath ledges and furniture and are often hard to maneuver around obstacles.

Another option is to use an  auto-vac floor cleaning system. With these systems, once again, no mops are used. Fresh cleaning solution is applied to the floor. As the machine is walked over the floor, a pad provides agitation to loosen soils, which are then vacuumed up by the machine. Auto-vac systems work well on small to large floors, are inexpensive, and require minimal training. These machines are easy to maneuver

Our goal is to provide administrators and cleaning professionals with factual data and a rational basis for action, looking for floor cleaning alternatives that help reduce the spread of contaminants and keep facilities healthier. As we mentioned earlier, while the discussion here involved medical facilities, the same concerns about the spread of disease can apply to schools, office buildings, senior care centers, and other types of facilities. Mops and buckets are simply not an effective way to keep floors and facilities healthy

Robert Kravitz is president of AlturaSolutions Communications, a communications firm based in Chicago.

More items on floor mopping can be found here.