You are here: Home / Blog! / Hey, Are Newsletters Dead?

Here’s the good news: Studies indicate that 99 percent of us check our email every day.

Here’s the not-so-good news: Open rates of newsletters are dropping and have been falling for several years now.

The type of newsletters today that have the highest open rates in the U.S. are those that relate to hobbies, everything from husbands that like to cook to classic car enthusiasts. These have an open rate of about 30 percent, which is considered very good, but open rates around 20 percent or less tend to be all too common for other newsletters.

So, it’s fair to ask, are newsletters dead?   And if they are dead, why do we get so many of them. Let’s look at the answers to these questions.

Newsletters are not dead. What is dead is the old format of delivering them. 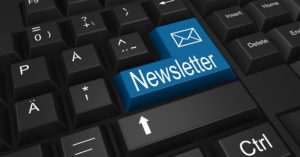 The reason we get so many is that, as a marketing tool, they still can work, improve sales, and build customer loyalty. But they need to be reformatted to address changing standards and tastes.

Here are some ways to make newsletters powerful again:

These newsletters have better open rates. If you have not collected names, try something like this: “Hey HVAC Professional: Here’s How to Save Big on Installations,” assuming this newsletter is going to people in the HVAC industry.

Add emojis. As silly as it might seem, subject lines that include an emoji tend to have higher open rates. Here’s a website that allows you to cut and paste them and place them in your subject line, further helping to personalize it. Just be sure and select those that are fun but professional. If you don’t like emojis, even doing something such as adding a string of stars – ⭐⭐⭐⭐⭐ – tends to improve open rates.

Ask permission. Most of us are guilty of overlooking this. Prospects or consumers contact our company, sometimes just by using a chatbot, and before they know it, are getting newsletters from us. Even though this has been common practice, once again, studies report that those marketers that received permission from a consumer or prospect first, before sending them a company email or newsletter, tend to have better open rates.

Mobile-friendly. By now, most of us realize the importance of having a newsletter that can be easily viewed on mobile devices. Mobile “opens” now account for nearly half of all email opens, and more than a third of business professionals now read their emails on a mobile device. This applies not just to emails, but newsletters as well.

Easy on the razzle-dazzle. Remember when many websites had a fancy, streaming introduction every time you visited the site? Marketers thought the razzle-dazzle would delight visitors. But what we found was they were fun the first time; interesting the second time; boring the third time; a bother after that. The same thing has happened to newsletters. While images, even quick videos, can be useful, too much razzle-dazzle typically turns readers off and means it takes too long for the newsletter to download. The more time it takes, the more likely the recipient will move on.

If your company is struggling with a newsletter and wondering if the entire concept is dead, before throwing in the towel, try making some changes. Newsletters don’t die; they get old and stale. Before you toss them aside, give them a second chance and try some of the ideas presented here.