AlturaSolutions turns words into sales.  This article, published for Crown Matting, is an example. 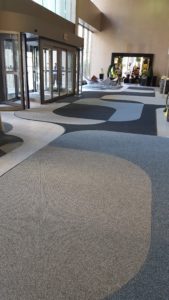 Researchers in one study selected a factory that was experiencing a significantly high accident rate along with high worker absenteeism. Anti-fatigue matting systems were installed in areas where workers had to stand for long periods of time, such as at assembly lines and workstations. They were asked to fill out a “Worker Perception” questionnaire three times per week for two weeks.

To determine if reduced pain and fatigue resulted in improved worker productivity, the researchers evaluated worker absenteeism and injuries during a 12-month period prior to installation of the mats. They found installation of anti-fatigue matting systems resulted in a 2.2 percent increase in worker productivity, partly from lower absenteeism, and partly due to decreased downtime from injuries.

High performance floor mats find new roles
Mats have traditionally been used to prevent injuries such as slips and falls and to keep facilities clean. But now high-performance matting systems refers to mats usually purchased directly from distributors, made of higher-quality materials than rented mats, and designed to last for several years â€” are playing many new roles.

“High-performance and appropriately sized entry matting systems [are] an integral part of every green building,” said Stephen Ashkin, a longtime advocate of green cleaning and president of the Ashkin Group, LLC, and executive director of the Green Cleaning Network, Bloomington, Ind. “They are one of the best pollution prevention strategies that can be employed to reduce soils before they enter a building.”

Understanding anti-fatigue and green mats
Anti-fatigue floor mats installed in industrial settings are engineered with increased elasticity, which helps them absorb vibrations that can become bothersome over long periods of time. Often they have thousands of air bubbles, which help prevent fatigue and create a soft, comfortable cushion to stand on, reducing discomfort and helping to protect worker health.

Green matting systems not only capture soils, moisture, and contaminants, but also store them. Whereas a conventional rental-type mat can quickly become saturated with soil and moisture and become ineffective, a high-performance green matting system contains the soil and moisture until they are removed safely and with minimal environmental impact with proper cleaning.