You are here: Home / The Power of BUZZ Marketing / How a Public Relations Program Cleared the Air

Public relations can be used in many different ways.  For instance:

Slovenia is a small country in Central Europe which had a colossal problem: air pollution. While it only has a little over two million people, most of the buildings, schools, and especially the houses, in the 1990s were powered and heated by burning coal, wood, and oil. 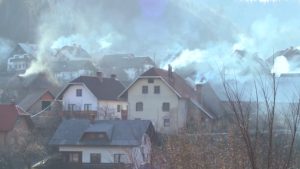 Making matters worse, most of the urban areas are situated where air inversions happen frequently during the winter months. When this happens, a dense layer of colder polluted air becomes trapped under warmer air in the atmosphere, intensifying the pollution and making breathing more difficult.

While the country had taken some steps to reduce air pollution generated by some of its power stations, it was not nearly enough to have a sizable impact on the problem. More steps were needed by the general population — especially in their homes — to reduce the air pollution. But being a new and emerging country, the government was stymied as to how this would be accomplished.

About 1995, a consortium including the European Commission and the World Bank created a fund – known as the Eco-Fund – from which Slovenians could borrow money at low interest rates to convert their home heating systems from operating on fossil fuels to using cleaner energy sources, such as natural gas.

Now what had to be done was tell the country’s citizens about the program and sell them on it so that they would  take advantage of it.

To do this, a public relations program using marketing content was implemented. The program consisted of the following strategies:

The public relations campaign did include some advertising, however the bulk of the “get the message out” was handled by PR.

And public relations can do wonders in a situation like this because the air pollution problem and its long-term health and business ramifications had to be explained.   PR is an ideal vehicle for explaining things, such as the benefits of a new product or service.

It can be tough to explain a situation or an issue in an advertisement. People need to hear and read about it, and that is exactly why this PR campaign worked.

So, what were the results?

And the numbers kept increasing through 1997.

Initially, the Eco-Fund was to expire in 1997, but due to its success, funds were made available through 1998 helping the country make a noticeable dent in its air pollution problem, which contributed to improving the health and business climate for the entire country.