You are here: Home / Blog! / How to Make Article Titles Stand Out

In order to promote a client’s products or services, one of the most important parts of any article it the article title.  This is true if it is a news story, press release, product release, blog, or any other form of content posted online or in print.

The title has to have zing. Even if the article or story is sent to a trade publication editor who later changes the title (as so often happens), you still have to get the editor’s attention, and some zing will do it.

The following are some steps I’ve learned to help make article titles stand out and grab the editor’s and your readers’ attention:

First, make sure the article title can get picked up by search engines.

Not only should your title use key words that can be picked up, but these words should specifically reference what the content is about. For instance, for a content marketing site we are handling, we revised the title “New Report Shows Climate Change Is Already Here,” to this: “Climate Change . . . It’s Here!” The key search engine words “climate change” are listed first, making it more likely they will be picked up, and the shortened title is more of a zinger. 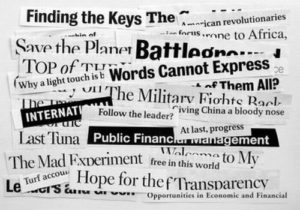 Turn the title into a question.

Titles that ask a question pique curiosity, especially if it is one the reader can identify with. For instance, consider this classic one by Bill Jayme published in Psychology Today: “Do You Close the Bathroom Door Even When You Are the Only One Home?”

Draw people in with numbers.

Using numbers in a title is especially effective for an article or story that offers tips or suggestions on how to do something. Such titles as “10 Ways to Relieve Stress” or “5 Steps to Making Your Building Greener Now” pull people in.

Grab attention with a negative headline.

B2C media is well aware that negative headlines get people’s attention, and that’s why they often adhere to the old rule: “If it bleeds . . . it leads.” Studies have also found that titles that include words such as “kill(ed),” “dead,” or “feared” tend to get more reads and social media shares. Negative titles are less common in B2B publications. If using one, ask others their opinion of the title before posting online or sending out as a press release/news story.

“How-to” titles are powerful and work very well in both B2B and B2C publications. In fact, many books with the longest longevity are books that have the words “how to” in their titles. For example, “How to Start a Business” and “How to Flip Houses and Win Big,” among others, are zingers.

Reference experts in the title.

If possible, reference a well-known expert in your industry or one who is well-known to the general public. A perfect example would be “Martha Stewart Shows How to Make Pumpkin Pie.” Everyone knows Martha Stewart; her name alone will likely cause a reader—at least one interested in making pumpkin pies—to stop and check out the article.