With the current meltdown on Wall Street, and concerns we are now deep into a recession, if not worse, I thought this would be a good time to discuss marketing budgets.

Invariably, the first thing many companies do when a recession occurs is cut their marketing budgets. This was widespread after the 2008 Great Recession, and fortunately, until now, nothing like that has happened since.

But is it the right thing to cut back on marketing when times get tough?

History tells us it is not. Some of the most successful companies we have today either started during a recession or the 1929 Great Depression. 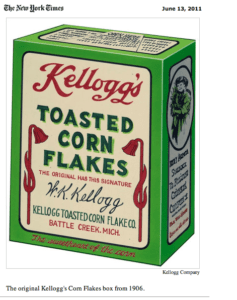 And, if we look a little closer, we see “the roaring twenties” were not all that roaring after all. In 1923-1924, there was a recession. This was also when Disney pictures started on a shoestring budget.

Jumping ahead to the rocky 1970s, the economy was up and down most of the decade. But this is also when Bill Gates and Paul Allen started Microsoft.

These companies all invested in different forms of marketing, including traditional advertising as well as public relations strategies. Gates, specifically, was a big supporter of PR marketing content creation. It helped them not only survive these tough times but thrive.

But here is what is believed to be the most powerful example of how increasing marketing budgets during a down period, a company was able to get ahead of its competitors. It’s all about Kellogg’s and Post cereals.

Before the Great Depression, C.W. Post was the dominant player in the breakfast cereals industry. The company was founded in 1895, and acquired one company after another before the Depression hit. Post was way ahead of Kellogg’s, viewed as a small rival.

Kellogg’s took a different approach. The company devoted as much of its resources as possible to increase marketing. Because the prices of Post and Kellogg cereals were about the same, the increased marketing led more people to purchase Kellogg brands, if for no other reason than to try it. Many liked it and preferred it.

But then what happened next was even more significant. There was a great deal of customer loyalty in those days. Consumers that tried Kellogg’s cereals and liked them continued to purchase them when things got better. Few went back to the Post brand and all of Kellogg’s marketing made consumers think they had made the right decision.

Since the late 1930s, Kellogg’s has been the leading cereal company in the United States, and Post has never caught up.

This is viewed as one of the most important examples of the need to market during difficult economic times and not cut back. However, there were many more examples. Many companies if not most decided to wait-out the Depression. They stopped marketing altogether. Guess what, most of them were never heard from again.

The takeaway, as blunt as it may sound, is this: Those companies that rang up the most sales when the economy was struggling, found ways to increase their marketing budgets – not decrease them. It worked. Think about this if your company is considering cutting back on advertising during this rough period in our history.