You are here: Home / Blog! / How PR and Marketing Content Got the Concorde Off the Ground

Most of us have heard of the Concorde. It was one of the most famous airplanes in aviation history.

But what most of us do not know is that if it was not for effective PR strategies, it would have never taken off.

When it was introduced in the early 1970s, it was equipped with the world’s most powerful jet engines. Its four Rolls Royce engines took advantage of what was known at that time as “reheat” technology. This, according to British Airways, “added fuel to the final stage of the engine, which produced the extra power required for take-off and the transition to supersonic flight.” 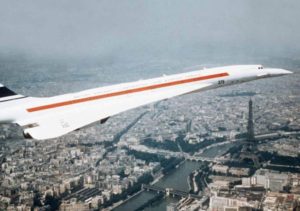 Its fastest transatlantic crossing was on February 7, 1996, when it traveled from New York to London in just under three hours.   The iconic aircraft finally went into retirement, mainly because of low passenger numbers, high costs, a terrible accident, and the aftermath of September 11.

However, what a lot of people do not know is that the Concorde faced so many challenges, it’s almost a wonder it got off the ground in the first place. The big obstacle: noise.

Governments around the world were concerned about the very loud noise from the plane when it was taking off. In time, one country after another banned the Concorde from traveling in their airspace, which almost doomed the plane’s future existence.

To help turn things around, a public relations marketing firm was hired to “proactively debunk” these noise concerns.

One of the first things the PR firm did to help pacify those complaining about noise was to record the Concorde taking off and compare the noise it made to other traditional airplanes taking off. Few could tell the difference. Using marketing content creation strateies, the PR firm made sure this message was sent out loud and clear.

Then the agency went to work, focusing on the business benefits the Concorde could bring to airports around the world. More travelers – and more very well-heeled travelers – would be flying into and out of these airports.

The first U.S. airport to give it a try was Dulles International Airport in Washington, DC. This helped government leaders fly in and out of the U.S. quickly. With this feather in their cap, the marketing firm wanted to open the door to New York’s JFK International Airport for business travelers.

That took a little time, but as soon as that was attained, the plane really started taking off. While the Concorde was never designed to travel to airports all over the world, as a result of the PR firm’s efforts, enough governments and enough airports around the globe opened their doors to the Concorde to make it a success. The plane eventually went from a very rocky start to an iconic ending in 2003.