It seems to have slipped into long-lost history, but right after World War II, archaeologists began working in and around the Colosseum in Rome. Initially, their work was to ensure that the famed amphitheater and the area nearby had not suffered any damage due to the war. If there was damage, and because the structure is considered a world treasure, efforts would be undertaken to support the building and the surrounding area. 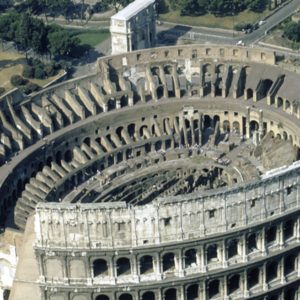 In the process of evaluating the foundation of a nearby building, they located what they believed to be an early prototype of a “grab-and-go” pizza parlor. Wooden worktables were in the back, along with flat cookware, likely designed for cooking pizza. In the front was a waist-high wall, presumably a counter for serving pizza to customers.

Their assumption was confirmed when they found a stack of flat boxes made of heavily woven paper materials.

Hold on. This is all made up. But I hope it at least generated a couple of smiles. However, the “do not recycle” pizza box very well may date back to ancient Rome.

The recycling of paper products in the United States dates to the late 1600s when an English papermaker was granted a patent to recycle paper. According to the patent, he had developed a system where the ink on paper could be extracted, and the paper turned back into pulp. From here, a new paper product could be created.

This is the essence of recycling. It’s the process of turning what is now wasted material back into something—or the same thing—that can be used again.

However, along the way, few pizza boxes have been added to the paper recycling mix. For instance, a high-rise office building in Chicago has recycling containers on every floor of the building. When it comes to recycling waste materials, the following instructions are provided to tenants by recycling containers:

Items that can be recycled include:

Most boxes are made of corrugated cardboard, which is one of the easiest materials to recycle. It is also an extremely broad category, since so many products are packaged or made with varying amounts of cardboard.

However, there is no mention that these recycling containers accept pizza boxes. Now, Chicago is famous for its “Chicago-style” pizza, so we must assume some of this pizza—in pizza boxes made of corrugated cardboard—has found its way into the building at one time or another.

Yet they rarely, if ever, are deposited into these recycling containers.

Why aren’t pizza boxes recycled? It typically comes down to this: most people believe that because the boxes can get coated with cheese, grease, or oil, they are not recyclable. In fact, some recycling instructions will note that “food-stained paper” is not recyclable.

In Alabama, for instance, the Recycling Alliance of North Alabama (RANA) states explicitly that pizza boxes will not be collected nor are they to be recycled.

In New York City, they can be recycled, but only if you “remove and discard the soiled liner.” The soiled liner is typically where the cheese, grease, and oil collect. The instructions imply that if these food stains make their way onto the cardboard, the box should be discarded in the trash.

But wait, there’s more. Even Stanford University has gotten into the fray. According to this famed university:

Pizza boxes are made from corrugated cardboard; however, the cardboard becomes soiled with grease, cheese, and other foods once the pizza has been placed in the box. Once soiled, the paper cannot be recycled because the paper fibers will not be able to be separated from the oils during the pulping process.

What We Know Today

It appears that the Romans (may I mention them again in jest?), New York City, the Alabama recycling center, even Stanford University may have this wrong. Recent studies have found that, yes, pizza boxes can be recycled, and we are encouraged to do so.

In the summer of 2020, the American Forest & Paper Association (AF&PA), a national trade group for the paper and wood products industry, along with WestRock, a manufacturer and supplier of corrugated cardboard and related products, released a study. Their study found that not only can the pizza boxes be recycled, but the presence of cheese, grease, and oil—at levels typically found on pizza boxes—does not impact the recycling of these boxes.

“Corrugated pizza boxes are successfully recycled every day at paper mills throughout the country, yet consumers remain confused by mixed messages suggesting that some boxes should not be put in the recycle bin,” said AF&PA president and CEO Heidi Brock.

“So, let’s be clear: pizza boxes are recyclable. Consumers should not be concerned about grease or cheese; remove any leftover pizza and place the box in the recycle bin. We encourage communities to update their residential recycling programs’ guidelines to accept pizza boxes that are free of food explicitly.”

Pizza Box Recycling is a Win for Sustainability

The study did not indicate that this is due to new recycling technologies that allow food-stained pizza boxes to be safely and successfully recycled. However, we do know that the recycling industry is huge—worth over $500 billion globally—and is expected to grow much more in years to come. Obviously, engineering companies worldwide are putting a lot of time and effort into developing new technologies that can help them get on board this burgeoning industry.

This is a big win for the consumer and for sustainability. Several experts are now predicting that the post-COVID era will place much greater emphasis on Green and environmental issues.

“With this restart [of the economy], a window of hope and opportunity opens … for nations … to shape the 21st century economy in ways that are clean, Green, healthy, safe, and more resilient,” says UN Climate Chief Patricia Espinosa.

Although she did not mention pizza boxes specifically, now that we know they can be recycled, it means we can have our pizza, recycle our pizza boxes, and know we are doing our part to protect the environment and promote sustainability.

Gretchen Friedrich is marketing manager at AFFLINK, a 300 plus distributor member organization, serving several B2B industry sectors including foodservice, healthcare, education, and professional cleaning.  She can be reached through her company website at www.afflink.com