I must admit, when I first heard about it, I hadn’t given it much thought.

The Earth, one of my classmates said, We must protect it.

I looked out the window, and the sky was as blue and beautiful as ever. 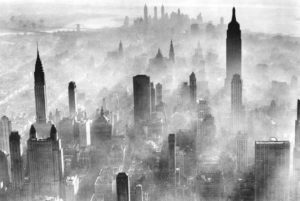 Out in the distance, the hills were green, a little snow on the very top.

They looked the way I always remembered.

They looked the way they should.

Why was he saying protect the Earth?

What did he want us to do?

Then one weekend, my family took a drive.

We hopped in the car, took a weekend vacation, to a spot not too far away.

On the way back, dozing in and out of sleep, I could see we were approaching our town.

That’s when I noticed something unseemly, something I had never seen before.

A brown haze was hanging over the city.

Is that what we’re breathing? Where did it come from? And shouldn’t we do something about it?

I pointed it out to my mother and father.

Maybe they knew what to do.

Surprised to see it, they had no answers for me.

And so I did nothing. I went on just as before.

Then something else happened.

It was 1966, Thanksgiving weekend in upstate New York.

Instead of snow and cool temperatures, like they normally had, the news was all about how warm it was

Of course, all the kids loved it. It was like having summer all over again.

But then we heard: Smog alert in New York City.

And then we heard: Two hundred dead from smog.

That’s when I knew something was wrong.

That’s when I knew what my classmate was trying to tell me.

Something was happening to our planet.

It’s not good, it’s not healthy, and I realized we must do something about it.

Then I realized I must do something about it.

That was my Earth Day awakening, and I have been an Earth Day advocate ever since.