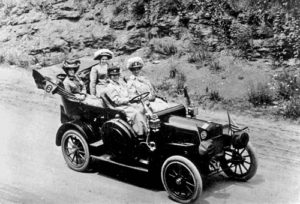 gathered at 1030 Broadway. The center of attention was Alice Ramsey. Just 22 years old, Ramsey was about to make feminist – and automobile – history. She and her companions put on their rubber helmets and goggles – all standard headgear when motoring at that time – and started off to make the first all-female cross-country trip in world history.

Ramsey was no stranger to driving. The year before her trip, her favorite horse sped away when a “monster” made its way into her barn. Her husband decided to buy her a car, and she began taking trips all around New Jersey and surrounding states. She clocked 6,000 miles in one year, mostly driving on dirt highways never made to be driven by car.

She got the attention of a major automaker of the day, Maxwell company, and they asked her if she would take an all-expenses-paid trip from New York to San Francisco in their latest model. The automaker thought all the attention and PR would be a great way to sell their cars.

At the time, most people thought driving a car was difficult and dangerous. But if a woman could do it, then anyone could do it, or so they believed.

The Maxwell company followed her and her companions along their trip as did the crowds on horseback. The automaker kept sending out news stories to local newspapers indicating when Ramsey and crew would be traveling through. The company also reported the drive from coast to coast went without a hitch. That was far from the truth.

First of all, they relied on something called the Blue Book to help navigate. There were no maps. The driving directions in the Blue Book was often far from precise.

Usually, it would provide instructions such as “turn right at the yellow barn” or “if you passed the blue house on the left, you’ve gone too far.” All too often, they never saw that “yellow barn,” and no one could remember seeing a “blue house” along the way.

Further, while the car was quite impressive for its day, it had its own set of problems. To check the fuel tank, you had to lift the back-seat bench and stick a ruler into the tank to determine how much fuel was left.

While it held 20 gallons, they often overestimated how far that would take them, so running out of fuel was pretty common. Also common were tire blowouts and the car overheating.

At one point, they had to empty all their liquid toiletries, fill them with ounces of water found in roadside ditches, and pour the tiny amounts of water into the radiator. They transported these small amounts of water dozens of times, helping to cool the car down enough to resume their trip.

Ramsey continued her cross-country drives. The Automobile Manufacturers Association christened her the “First Lady of Automotive Travel.” Later in life, she drove up the Swiss Alps six times to prove it could be done, and a lady could do it.

She died in 1983. Much of her storied history was forgotten.

The Maxwell Motor Company was taken over by Chrysler in 1926. Few remember much about the company today.