When you explore the life and times of many Thought Leaders, you realize that most of them never intended to become a Thought Leader. Yes, they were typically leaders in their fields, and many of them had already made a name for themselves, but not necessarily as Thought Leaders.

What happens is they get behind a concept, an idea, a company, or a product, and their enthusiasm grows. Think Steve Jobs as a perfect example.

As it grows, it gets support from more and more people. Once this happens, it’s like a Catch-22, but this time a good one. If the concept, idea, company, or product being promoted by the Thought Leader proves it can help others, the their stature in their industry — and often in several industry sectors — grows exponentially. 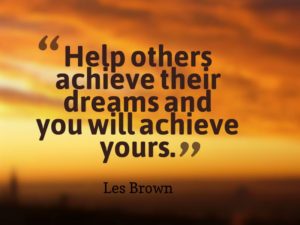 This can have a significant impact far beyond the individual. In 2018, Forbes magazine reported that “the reputation of a company’s leadership is directly responsible for 44 percent of a company’s market value.”

And that’s not all. According to the international advertising firm Ogilvy, the key individuals in an organization, especially if they have become respected Thought Leaders, play a crucial role in the fortunes of that organization.

So, if this is the case, some readers might be eager right now to uncover what it takes to become a successful leader. But before doing that, let’s make sure we are all on the same page about what a Thought Leader is. The definition I like to use is the following:

A Thought Leader is an individual or company (yes, companies often are Thought Leaders) specializing in a field whose authority is honored and respected and whose comments are sought after by others.

With that understood, here are four key steps it takes to become a Thought Leader, whether this is for yourself or your organization:

Pay your dues. Previously, we said most these Leaders never started out to be Thought Leaders. Instead, what they did, was learn their industry inside out. Or they got behind a concept or idea and persevered long after others thought them wrong. Either way, they paid their dues. It typically takes time, but the bright lights of success are just on the other side of the tunnel.

Build a “content bank.” A content bank consists of high-quality content published in industry trade publications, blogs, social media, videos, interviews, and especially, articles posted on their LinkedIn profile. This is what builds their stature. View it as a “bank.” It’s an assortment of content deposits in various formats readily available to others.

Help others. No industry leader can succeed if they do not help others. Possibly, they help make them more prosperous, healthier, or more successful as a salesperson or parent. Often, when these future leaders first begin their journey, others don’t recognize their value. This is when perseverance pays off. If the Thought Leader believes in their ideas, concepts, or products, eventually others will as well.

Brand yourself. Thought Leadership and branding go hand in hand. You may have paid your dues, created a content bank, and helped many people, but if you’ve not taken steps to brand yourself or your company, you are in for a struggle.

According to the American Marketing Association, branding is the process of creating an image in the consumer’s mind of who you (or your company) are and what you represent. In other words, it “identifies one seller’s goods or services as distinct from those of other sellers.”

Branding accomplished?  The next step is marketing . . . in our next post.