Biofilm microorganisms have been associated with several human diseases, including valve endocarditis – an infection that settles in the heart – and cystic fibrosis – the biofilm protects the bacteria that can cause this disease.

One of the best ways to define biofilm is as a substance that houses a wide variety of germs and bacteria including bacteria such as E. coli and salmonella. 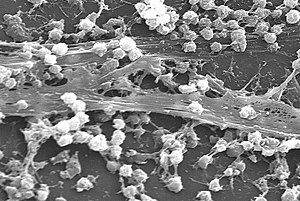 These microorganisms have been associated with several human diseases, including valve endocarditis – an infection that settles in the heart – and cystic fibrosis – the biofilm protects the bacteria that can cause this disease.

They are most frequently found in toilet bowls, shower areas, gym restrooms, damp floors, drains, or other areas that remain moist.

But there are some unusual – even strange – facts about biofilm that we should know. Among them are the following:

They’re Tough: The bacteria within this film are as much as 1,000 times more resistant to antibiotics and disinfectants than bacteria found outside of biofilm.

They’re Found in Disinfectants: Amazingly, biofilm has even been found growing in disinfectants, the very cleaning solutions typically used to eradicate them.

They’re Smart: A biofilm colony can tell when it is threatened, especially with some type of cleaning solution or disinfectant.

They Survive: When threatened, cells in within the film begin rapidly start mutating; the outer layer of the biofilm becomes thicker to protect the germs and bacteria inside.

They’re Helpful: Surprisingly, biofilm found in the stomach and intestines can help prevent invaders – other types of germs and bacteria – from harming us.

They May Have to Be Electrocuted: Because biofilm is so tough and hard to remove, when it builds up on medical instruments, sometimes the only way to kill it is using direct current electricity.

They Love Mops: According to the book Diagnostic Microbiology, they can be found on mops; the moisture on the mop feeds the biofilm and the strings help protect the colony.

They Can Keep a Secret: It is often very hard to know if biofilm is growing on a mop, in a mop bucket, or even in a disinfectant.

Now that we know some unusual facts about biofilm, we should also know the best way to prevent biofilms from growing and that is prevention. Frequent and effective cleaning and keeping surfaces dry is the safest and healthiest strategy.

Articles related to this can be found here.