You are here: Home / Blog! / New Study on the Best Times to Post on Social Media 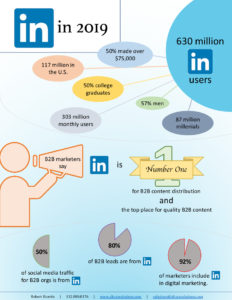 For the experiment, the research team analyzed HubSpot’s customer base for one week during the month of June. Roughly 10,000 different accounts on several different platforms were analyzed as well as 15,000 posts on LinkedIn, 25,000 posts on business Facebook pages, and nearly 60,000 posts on Twitter.

Here is what they found:

There apparently is no “best time” to post on Twitter. It appears whatever time is convenient for you is also convenient for Twitter and its followers.

As for the best day to post on Twitter, once again, the experiment showed that no particular day appeared to be any more effective or generate more attention than any other day.

It does appear, however, that the more you post on Twitter, the more attention the posts receive—the more Tweets, the more clicks.

According to HubSpot’s research, the best time to post articles and items to LinkedIn is during business hours. After 5 p.m. and into the evening, attention and traffic appear to die down.

As for the best days to post on LinkedIn, Tuesdays, Wednesdays, Thursdays, and Fridays get the most attention. Weekends and Mondays just don’t generate enough traffic or attention to post on those days.

It is very important, according to the HubSpot study, to know how frequently to post on LinkedIn. Apparently, publishing more than five times per week means attention to your posts drops considerably. It appears that about two posts per week will generate the most attention and web traffic.

As most B2B businesses know, Facebook has simply not met its early expectation as an effective marketing tool. According to the study, “most posts on Facebook don’t do very well,” referencing business marketing. However, the researchers did add when using Facebook that it is most important to focus on quality content, which should help generate some interest.

So, why should your business not dismiss Facebook altogether? The report did list three reasons why marketers should still give Facebook a shot. These reasons are:

You’re alive: Publishing on Facebook shows you and your company are alive and doing well.

Viral: It appears there is a greater chance of a post going viral on Facebook than some of the other social media venues. In fact, according to the report, “when you go viral on Facebook, the upside is very, very high.”

ROI: According to the researchers, there is one more big benefit to Facebook and that is placing ads on the site. “Facebook Ads offer some of the highest ROI of social ads you can buy, especially if you are doing any retargeting,” noted the report.

More on Social Media can be found here.