You are here: Home / Blog! / Was I Wrong About Branded Articles?

The public relations industry has historically had a rocky relationship with what are called branded articles and the concept of native advertising.  A few years back, I joined the PR chorus, questioning the effectiveness of branded articles.

In contrast, what the PR industry has traditionally valued is known as earned media. Earned media refers to content that is usually educational in nature and of such high caliber and quality that editors are happy to publish it without charging for the placement. 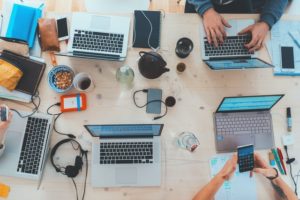 trade publication. While the editor will not allow the article to point specifically at a product or brand, she will allow, for instance, product images in the article or for it to be bylined by a company CEO. It may also tactfully discuss the features and benefits of a product, but without mentioning the name of the product.

With a branded article, all that nonpromotional stuff goes out the window. Because the client is paying for the placement, they are free to mention their products by name along with the products’ features and benefits. Further, because virtually everything is now published online, hyperlinks are added to the article connecting the article to product pages. This way, the client knows how often a visitor clicks on those hyperlinks and, taking this a step further, if those clicks turn into leads and sales. This measuring and monitoring is not possible with traditional thought-leadership articles.

There are, of course, some guidelines and best practices to help make native advertising effective. For instance, the articles should have the same look and feel as the publication in which they are published. Legally, somewhere on the placement it must say this is an “advertisement” or a “paid placement.”

Further, to be effective, it still must teach. Like earned media, branded articles should provide valuable content for the reader. They just take things a step further and point directly to products and brands that can help the reader address the challenges discussed in the article.

Until the past few years, not only has the PR industry been uncomfortable with branded articles, but there has also been considerable resistance to them from other sources. For instance:

A decade or more ago, there was considerable resistance to native advertising by major publishers. Many believed that branded articles took away from the credibility of the entire publication.

For the most part, that has changed. Most major publications now welcome native advertising. In fact, for some, it has become a significant source of income. At this point, most major outlets from the New York Times and the Wall Street Journal to fashion magazines and a host of B2C magazines, now include branded articles in their periodicals.

Years ago, some consumers reported they felt “cheated” after reading branded content. They believed what they were reading was educational, helpful information. When it pointed directly to a product, the entire article lost credibility.

However, consumers today have fewer problems with native advertising. Studies indicate that most consumers prefer reading branded articles in publications compared to viewing traditional advertisements. It appears they like branded articles because, if the articles are written well, they learn something from them. It can be hard to learn something from a traditional advertisement.

Many advertisers have been slow to try native advertising. Until recently, there have been few studies finding it to be effective, or effective enough to be worth the cost. The expense has been the other reason for advertiser resistance. Depending on the publication and its readership, the costs to place a branded article can be high.

But, Are Branded Articles Effective?

Ultimately, what it all comes down to is this: Are branded articles effective? The answer appears to be yes. A study conducted by the Content Marketing Institute concluded:

Based on these findings, the Content Marketing Institute also concluded:

I now agree with this statement.