You are here: Home / AlturaSolutions Newsroom / We’ve Got a Trash Liner Problem in the U.S.

We’ve Got a Trash Liner Problem in the U.S. was published for client Kaivac

Have you ever seen the trash collection area of a restaurant after hours? A large coffeehouse? Or possibly a sizeable downtown office building?

You are likely to see that most of the trash collected is placed into large, multi-gallon trash bag liners, possibly dozens of them every evening. 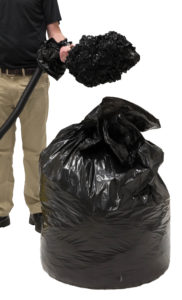 Because you are environmentally focused, you also might assume those trash bag liners are recycled. After all, most large waste collection companies in North America now use technologies that help separate items that cannot be reused from items that can be reused and recycled. This would, we assume, include the higher-quality plastic used to make durable trash liners.

However, and unfortunately, you would be wrong. While these plastic trash bags may at one time – in the past – have been recycled and used to make other products, even other trash bags, the bulk of them now end up in landfills or incinerators that can emit toxins and pollutants into the air as they are being burned.

So, if they were once recycled and reused and now they are not, what happened?

What happened is that as of 2017, China, once the largest importer of plastic waste from the U.S., stopped purchasing these materials.

While they still purchase higher quality plastics, often referred to as “mixed plastics” such as large water bottles, laundry detergent containers, and milk jugs, they have no use for plastic trash liners and many other forms of plastic waste. (See Sidebar: Did You Know Your Plastic Has a Number?)

This has sent shockwaves throughout the American and international recycling industry because China was the largest purchaser of plastic waste in the world. No single buyer can replace that one market. In fact, only about half of the plastic waste, once purchased by China, is finding its way to any markets, anywhere in the world.

It is now believed that nearly 20,000 shipping containers of plastic waste, once used for recycling and once exported abroad every month to China and a few other countries, are now marooned at home in the U.S. That is equivalent to enough plastic to fill more than 250 Olympic-sized swimming pools every month. 1

This has put many facility managers as well as members of the professional cleaning industry into a bit of a dilemma. Building managers, as well as contract cleaners, have become much more sustainability-focused over the past several years. It was a natural progression from green cleaning, which swept both industry sectors a good 15 years ago.

So, if we know plastic trash liners will likely be incinerated or end up in landfills, where they can take years to degrade, what can managers, cleaning professionals, and others focused on protecting the environment still do to promote sustainability?

These steps provide a place to start:

Reuse in the office. At one time, cleaning workers emptied small trash cans at individual workstations by gathering the plastic bag containing the trash and tossing the bag – and the garbage – out. Those trash liners can be reused several times before they should be tossed, if they are in good condition and do not contain wet debris.

Wet or dry. Related to this first suggestion, select one set of liners to be used for wet debris and another for dry waste. As we just mentioned, liners that contain wet trash should be changed regularly; the dry liners do not.

Select a cleaning system/trash compactors. At least one manufacturer of floor, wall, and surface cleaning equipment used in the professional cleaning industry, has developed an inexpensive, add-on feature to some of their machines that removes air from trash liners. These vacuum-powered trash compactors are similar to a food sealer. They suck the air out of trash liners, reducing the waste volume by as much as one-half.  This creates more room for more trash to be collected per trash liner.

Eliminate liners. Some building managers are experimenting with eliminating the use of trash liners entirely. Trash is placed in cans without liners.  The garbage is later collected and placed into large liners. However, the drawback is that this means garbage cans will need to be cleaned – often pressure washed – regularly.

We should also mention that government bodies are looking for options as well. In Canada, a program is in place requiring manufacturers to pay recyclers to recycle plastic items. This will help replace the market China once provided. Similar programs are being considered by states in the U.S. as well. However, at this time, there are no federal programs in place or being considered to recycle plastic liners or find new uses for them.

Matt Morrison is communications manager for Kaivac, manufacturers of professional cleaning equipment designed to prevent the spread of infection and promote sustainablity. He can be reached via his company website at www.kaivac.com

Sidebar: Did You Know Your Plastic Has a Number?

Plastics produced in the U.S. are identified with a number, actually a resin code, to facilitate post-consumer recycling. The numbering scheme identifies how the material should be processed or recycled.

Plastic items numbered one or two generally are most widely recycled. Examples in this category are large plastic jugs and bottles, which often can be recycled repeatedly. Recycling may not be widely available for plastics that carry a number four or higher; this group includes plastic film, plastic trash can liners, as we have discussed, and polystyrene food containers.

For recycling purposes, plastics must be separated, in part, because of the different temperatures necessary for processing. Films melt at much lower temperatures than some of the harder plastics. 2