You are here: Home / Blog! / What is the History of the Green Cleaning Movement?

The history of green cleaning and the green cleaning movement in America goes back more than fifty years and is actually quite interesting.  It actually all started with Rachel Carson. 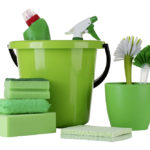 Although Green Cleaning, sustainability, and other environmental-related topics are today taking center stage in the cleaning, building, construction, and several other industries, moving them to the forefront has actually been a rather slow process. In fact, many believe the first seeds for the movement were planted almost 50 years ago.

In 1957, Olga Huckins heard a plane buzzing over her country home spraying the air with a chemical mist used to kill mosquitoes. The chemical, DDT, settled over nearby marshes, crops, and waterways. The next morning, Huckins found seven dead birds on her property. What was even more traumatic for her was the fact that the birds all appeared to have died in great agony—their bills gaped open and their claws drawn up in an awkward, unnatural position.

Huckins wrote a letter to a local newspaper complaining about the mist and sent a copy to her friend Rachel Carson, who worked for the U.S. Fish and Wildlife Service as an aquatic biologist. Moved by the letter, Carson said, “There would be no peace for me if I kept silent about this.”

As a result, in 1962 Carson published her groundbreaking book Silent Spring, which caused a commotion and forced the general public and members of the U.S. government to take a serious look at society’s use of chemicals and pesticides. Although she did not advocate banning chemicals, Carson encouraged that they be used wisely with greater awareness of their potentially harmful side effects.

By 1963, her voice reached the highest levels in our government. In making one of the first-ever presidential speeches discussing environmental issues, President John F. Kennedy warned, “The supreme reality of our time is the frailty and vulnerability of the planet we live on.”

By the end of the 1960s, college students and “hippies” took up the cause for “ecology,” as it was then referred to. The topic garnered more attention, and the first “Earth Day” was held in 1970, reflecting the much greater ecological—or environmental—consciousness that was spreading throughout the country and the world. Just a few years later, the first “Green” or “natural” cleaning products began trickling into health food stores in the United States and Canada.

Unfortunately, most of these initial product offerings had two things in common: they were expensive, and they were not that effective. Consumers wanted to do their part and use safer, healthier cleaning products, but they were simply disappointed with the products then available.

While the topic gathered momentum in discussion circles, there was very little improvement in most Green Cleaning products even as late as the 1990s. By then, more retailers were carrying environmentally preferable cleaning products, but many were the same as—or very similar to—the old items that had gathered dust on health food store shelves back in the 1970s.

Meanwhile, recycled paper was being introduced, but it looked and felt substandard. Similarly, Green laundry and fabric softeners were brought to market, but they often clogged washing machines, and the environmentally friendly dishwashing detergent of the day simply did not do a very good job of cleaning dishes.

Consumers had a terrible introduction and first impression of Green Cleaning products took many years to correct. It was the worst of all scenarios: a double whammy of inferior quality and ridiculously high prices.

These difficult beginnings caused serious problems for those of us advocating Green Cleaning. Studies by the Green Gauge Report, which started tracking Green trends back in 1990, found that the public’s interest in Green Cleaning and its knowledge of environmental concerns—once so strong and growing in the 1970s and 1980s—had declined dramatically by the 1990s. In fact, by 1996, fewer than one person in ten in the United States said they were willing to pay extra for an environmentally preferable cleaning product.

At that time, I was giving many seminars to just a handful of people. Still, even though I spoke to many empty seats, I believed strongly in the concept. I knew that Green products were improving and would continue to improve, and I stuck fast to my belief that Green Cleaning was good for the cleaning industry, the facilities we clean, their occupants, the users of cleaning products, and the environment.

One of the few environmentally supportive trends that managed to survive during this period was recycling. People did become much more conscious that certain items, such as paper, were recyclable, and technology advanced to the point where many recycled products were of as good a quality as the original. “Reduce, reuse, and recycle” became the mantra of facilities across the nation in the 1990s, and this trend was spurred on when companies found they could even make money on reusable products.

The Green Cleaning Resurgence in the 21st Century

Several Green trends have occurred in the past three or four years that hold out a future for Green Cleaning and the use of environmentally preferable products in building and construction.

First of all, environmentally preferable cleaning products have improved. Many, if certified by the U.S. Green Building Council’s Green Seal® program, are guaranteed to be cost-neutral as well as performance-compatible.

Green Seal is an independent, third-party, nonprofit environmental organization, which ensures that products meet strict environmental, health, safety, and performance requirements. It tests products used by a variety of industries, such as industrial and household cleaners, commercial adhesives and paints, and building chillers.

A second reason for the renewed interest in Green Cleaning products is Executive Orders signed by President Bill Clinton. These orders encourage the use of environmentally preferable cleaning products in all federal government agencies.  They only encourage—do not require—the use of Green products in the federal government’s more than 3.1 billion square feet of office space. Yet, under its influence city, state, and provincial governments throughout North America began instituting Green-only purchasing. This spurred the movement forward.

Additionally, other market forces are driving not only Green Cleaning but also the entire concept of sustainability in all building and construction–related industries during the past couple of years. LEED (Leadership in Energy and Environmental Design) and LEED-EB (LEED-Existing Buildings) now help industries define and measure Green Cleaning products and programs.  This has raised consumer awareness of the health benefits, cost savings, and value of going Green, all of which is helping to transform the entire building industry—along with the cleaning and construction industries.

As you can see, the history of the green cleaning movement in America started with one book, Silent Spring, and has been quite a journey.

Robert “Buzz” Kravitz is president of AlturaSolutions, which provides traditional PR/Communication services along with content marketing and search engine optimization programs specifically for B2B industries. Contact him at www.alturasolutions.com