To the surprise of many, some print consumer magazines are becoming more popular – and selling more subscriptions – in just the past few years, while other consumer print publications struggle to survive.

Print publications across the board have been on the decline for the past decade. The publishers usually point the finger at the Internet as the cause of their problems, and most everyone agrees: the Internet has played a significant role in changing how people around the globe get and read information. 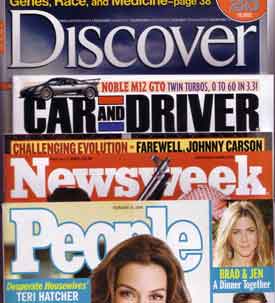 However, what seems to be happening is that the gossip publications, celebrity news, even most fashion magazines are the ones having the roughest times. The reason: Readers can find so many gossip, celebrity news, and fashion options online that these publications are no longer able to secure their niche and keep subscribers.

Plus, this type of information is known as “quick news.” It’s here today, everyone finds out about it, and then it’s over. Reporting on it in one of these publications a week or a month from now, unless the publication uncovers some juicy insights, simply does not draw much interest.

Print Consumer Magazines on the Upswing

Conversely, publications such as the U.K.’s The Economist has seen print sales and subscriptions rise. Further, Time Magazine in the U.S. is gaining subscribers as well.

So, why are these two publications and other news-focused publications doing well? According to Amol Rajan, media editor for the BBC, with Brexit and political turmoil in the U.S., readers are searching out traditional, print media outlets that have proven their credibility over the decades.

“Serious times call for serious journalism, and an extraordinarily frantic news agenda over the past year – with Brexit, Trump, a snap election, terror attacks, and Grenfell Tower – has driven sales boosts for upmarket titles,” says Rajan speaking in 2017. This is also the year many print publications report they saw a turnaround, with subscriptions on the upswing.

However, it is not just traditionally credible print news publications that are surviving if not thriving. Consumer magazines that cater to specific interests also appear to be doing well. For instance, as of 2018, the last year stats were available, the three fastest-growing publication in the U.S. were:

But here is another takeaway from these reports. Just as certain consumer print publications have proven themselves over the years and are doing well, many trade publications are also finding their footing in the digital age and finding ways to do well.

Most have already established themselves as reliable, credible publications that B2B purchasers can count on, especially when making purchasing decisions. Further, they all serve specific industries. In other words, if you are in the cleaning or HVAC industry, you’re likely going to turn to cleaning or HVAC publications to learn about what is new, happening, and trending in their industry sectors.

That impulse from readers is exactly what is keeping these trade publications afloat.

More on trade publications can be found here.