You are here: Home / Blog! / What’s This? Millennials Are Reading Books in Print?

This may come as a bit of a shock, but millennials are reading, much more than we realize. Some of the latest research from Pew Research, the National Endowment of the Arts, American University, and other organizations point to the fact that millennials – those ages 19 to 29 – are not only reading more than past generations but also prefer to read printed content. Remember that? That’s when words were published on paper and not found on a screen. 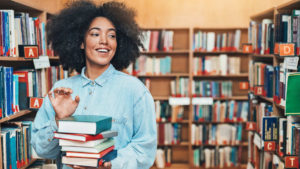 But here is the catch: 72 percent of these Americans prefer to read a book in print rather than onscreen. A 2015 study of 300 American University students may be able to tell us why. Fully 92 percent of these younger people report they prefer to read textbooks in print, and one reason is that they can better concentrate and comprehend what they are reading when it is in print form.

The endurance of printed materials may also be why independent bookstores appear to be defying expectations. When Borders closed its bookstores in 2011, it was believed this would be the start of a series of events, with large and smaller bookstore chains following suit, followed by the independents. However, the U.K. is witnessing a different trend, which is being seen in parts of North America and other parts of the world as well.

The number of “indies,” as these bookstores are called, were on the decline in 2011, when Borders shut down. However, the bottom appears to have been reached in 2017. At that time in the U.K., there were 868 indies in England, Scotland, and Ireland. Today, there are 883, and most report that this past Christmas was one of their best ever.

Although some indies in the U.S. are struggling to survive, observers are quick to point out what cannot be denied: they are still here and many are doing quite well.

So, Why Are Millennials Reading Books?

As to why this unexpected print reading might be happening, professor Naomi Baron has a few ideas. Baron, who conducted the American University study, believes there is a “physical, tactile, kinesthetic component” to reading books in print. For instance, when asked why they prefer print books, students responded with comments to the following effect:

So, what does this all mean? The first takeaway we should be aware of is that millennials like to read and read more than previous generations. That’s good to know. Second, although some readers may prefer ebooks, audiobooks, and other formats, print remains surprisingly strong.